Ethylene Oxide producers are reaping high returns from their projects in large part because of the dramatic improvements in EO catalyst performance that have been made over the years. 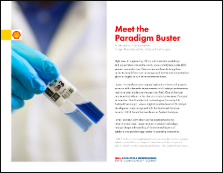 John Lockemeyer, Principal Researcher at Shell Catalysts & Technologies, discusses the major improvements in catalyst technology that he and the R&D team have made through a deep understanding of fundamental aspects of catalysis and practical application in operating companies.