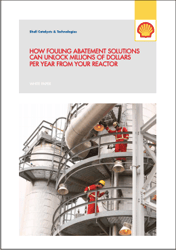 Fouling can dramatically curtail the performance and reliability of hydroprocessing reactors.

Refiners can substantially improve the profitability of their hydroprocessing reactors by using the latest-generation reactor internals. However, preventing foulants from reaching trays and internals are often overlooked.

In this white paper, learn how to:

And see how leveraging Shell Reactor Internals improves profitability and can unlock millions of dollars per year from your reactor.